When Mad Men debuted we were all captivated by the classy and sexy style that has now come to be known simply as the Mad Men style. Yet, styles changed rapidly after 1960. In the later seasons of the show, Mad Men takes us into the late sixties when rebellion against style and fashion became a growing anti-culture. This gallery highlights the emergence of characters who represent outsiders to the dominant establishment fashion, such as the "hippie" culture of the late 1960's. Let's recognize the artistry of the show we love by recognizing those great moments when the traditional Mad Men style collides with the rapidly changing culture of the late 1960's.

One of these things is not like the other

Abe Drexler suffers for his convictions

Don is not accepted by the Gaslight crowd 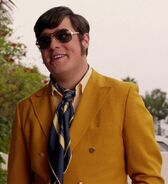 Hollywood Harry Crane
Add a photo to this gallery
Retrieved from "https://madmen.fandom.com/wiki/Anti-Establishment?oldid=21096"
Community content is available under CC-BY-SA unless otherwise noted.