Never without a bow tie, Bertram Cooper (d. July 20, 1969) was one of the founders of Sterling Cooper in 1923 along with Roger Sterling, Sr. He later became a founding partner of Sterling Cooper Draper Pryce before his death on July 20th, 1969. Bert Cooper was an avid collector of Japanese art and architecture as reflected in the decor of his office. Cooper rarely wore shoes indoors and insisted that all visitors to his office remove their shoes. ("Ladies Room")

Cooper's eccentric nature sometimes masked his crafty, cunning side. When Pete Campbell attempted to blackmail Don Draper about his past, Cooper cleverly eliminated the problem by claiming that he did not care. ("The Wheel")

A founding partner of the original Sterling Cooper, Bertram expressed his distaste at the idea of selling it to British agency Puttnam, Powell, and Lowe, but eventually agreed to the merger. After PPL was sold to the McCann Erickson agency, Cooper realized that he would most likely be forced into retirement, and so became a partner in the new agency. ("Meditations in an Emergency")

When Conrad Hilton's lawyers insisted that Don sign a contract before they would do any business with him, Cooper had no qualms about using Don's past to coerce him into signing. "Would you say I know something about you, Don?" he asked. "I would," Don agreed. "Then sign," Cooper said. ("Seven Twenty Three")

When rumors of the purchase of PPL, the parent company of Sterling Cooper Advertising Agency, reached Don Draper, he pushed Burt Cooper and Roger Sterling, the original senior partners, to attempt a purchase of the company. After presenting an offer, they realized it was a lost cause, until they hit upon an idea. Pryce, the representative from PPL with authority over everyone at Sterling Cooper, agreed to fire the senior partners, thereby severing their contracts (including the no-compete clauses in their contracts).

They secretly rounded up a list of clients loyal to them and stole important documentation that would smooth the transition. They then secretly selected Pete Campbell, Peggy Olson, Joan Holloway, and Harry Crane as the first employees. ("Shut the Door. Have a Seat")

Bert's contribution to the firm seemed to have diminished. He frequently pointed out to the other partners that he did not have an office. He was sometimes seen in the lobby.

When they got word that Honda was looking for a new advertising agency, Bert was actively involved due to his knowledge of Japanese culture. Roger was opposed to working with the Japanese, and in the middle of the meeting with the Honda executives, Roger burst into the office and started a rant, stating that they "don't want any of your Jap crap." After he left the room, Bert and the other members of SCDP apologized for Roger's rude behavior, but he soon realized that their chances had likely been blown when Honda did not send them a gift in the following days. ("The Chrysanthemum and the Sword")

When it was revealed that Lucky Strike was no longer going to remain in business with SCDP, Bert told Roger why he failed: Roger never took himself seriously, and so neither did Lee Garner, Jr., head of Lucky Strike. He was active in trying to bring in accounts and hold on to current accounts when the crisis hit the rest of the firm's business. ("Chinese Wall")

Bert was frustrated with Don's full page ad "Why I'm Quitting Tobacco," mentioning the hypocrisy of including Don's name and not the rest of the partners. Don declared that he was able to get a good night's sleep, to which Bert declared that he was resigning from the agency. He last says of Don, "We've created a monster." On his way out he tells Peggy and Stan that "It's been a pleasure," to slightly confused faces. However, by mid-1966 he had returned to the agency, with no explanation given. ("Blowing Smoke")

On the evening of Sunday, July 20, 1969, Bert Cooper, like millions around the world, was watching the televised coverage of the Apollo 11 moon landing. Cooper was at his private residence watching. At the moment following Astronaut Neil Armstrong's first steps on the moon, Cooper smiled and uttered one word, "Bravo!" Later that night, Roger Sterling received a call that Bert Cooper had passed away.

After announcing the news of Cooper's death to the company, Don Draper had a vision of Bert Cooper cheerfully singing "The Best Things in Life Are Free." ("Waterloo")

Bertram Cooper is the sage of Sterling Cooper. He is fond of argyle and bow ties. His fashion speaks of man who is delicate, eccentric, and prefers to be comfortable without being sloppy. Bert Cooper is fascinated by Japanese culture, which shows up in his office decor, but he only adds the cultural influence to his attire when wearing a kimono at home. He is almost never seen with shoes, but that is likely due to his respect for the Japanese custom of removing one's shoes in the home (though shoe removal is seldom the practice in the workplace). 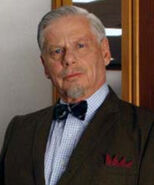 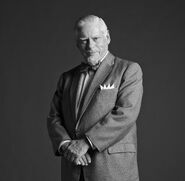