Henry Francis was the Director of Public Relations and Research for Nelson Rockefeller, New York's republican governor from 1959 to 1973. He met Betty Hofstadt at a party hosted by Roger Sterling and Jane Siegel. ("My Old Kentucky Home") while Betty was in the final months of pregnancy, and was immediately drawn to her. Several months later, Betty contacted Henry on the pretext of wanting his influence to help with a Junior League project she was involved in. After Henry's political maneuvering helped Betty and other housewives thwart the development project, he told Betty that he enjoyed making her happy and kissed her. ("Seven Twenty Three")

Unhappy in her marriage, Betty secretly started to write Henry letters. "I suppose I wonder too much where you are and what you're doing," she said in one. Soon after, Henry showed up at the Draper's house, saying, "I wanted to see you." Betty decided to host a Rockefeller fundraiser in order to hide the true purpose of Henry's visit from Don. When Henry didn't attend the fundraiser, Betty drove to his office to demand an explanation. "You had to come to me", he contended. "You're married." The two kissed, but when he locked his door she broke away from him: "It's tawdry", she announced before leaving. ("Wee Small Hours")

After Betty discovered Don Draper's true identity, Henry reinforced his desire to make her happy and asked her to marry him. The two met with a lawyer, who suggested that Betty divorce Don in Nevada. Henry asked Betty not to request a financial settlement. "I don't want you owing him anything," he said. ("The Grown-Ups") ("Shut the Door. Have a Seat")

Almost a year after Betty and Don's divorce, both he and his new wife were still living in Don's home, a house he still was paying for. Don requested that if they did not move out soon, he would need to start collecting rent. After Don left, Henry told Betty that he agreed with Don and that it was time for Betty to start looking for a house, and was promptly rebuffed by Betty. ("Public Relations")

His mother Pauline Francis did not approve of Betty, who made a bad impression at Thanksgiving dinner when she tried to force Sally Draper to eat the food that was being served.

Ralph Stuben, a a New York political operative for Congressman John Lindsay, joined Henry and Betty for dinner at a restaurant the same night that Don was having dinner with Bethany Van Nuys. Ralph and Betty joined Henry in walking over to extend courteous hellos to Don, and then went on their way to their own table. Once they walk away Don mentions to Bethany that Ralph is about to have a horrible dinner. Betty was aggravated at the mere sight of Don and spent most of the dinner glaring at Don and drinking copiously, embarrassing Henry. Later, on the way home, he told Betty that she carried too much anger towards Don, comparing the situation to that of him and his own ex-wife, saying "Hate's a strong word, Betty. I hate Nazis. I have an ex-wife. She bothers me. I don't like seeing her. I don't hate her...I'm an adult." They got into an argument, and he also wondered out-loud if he and Betty got married to quickly, which aggravates Betty, as she was six months pregnant when they met.

Henry was largely a calm, mature influence in Betty's life. He was very practical and did not give in to emotion. One rare occasion in which he displayed anger was that on his way to work, he deliberately rammed his car into boxes that Don was storing in the garage. He then called Don and told him to pick up the boxes the day before Gene's birthday. He picked up the boxes, which were on the curb, and saw Henry mowing the lawn. Henry was slightly shocked when he saw Don show up for Gene's party, though Betty comforted him, telling him that she had everything. ("The Summer Man")

After a visit by agents investigating Don's background, Betty told Henry that she did not want any secrets between them. ("Hands and Knees")

Henry was happy to finally hear that Betty was ready to move out of the house. ("Blowing Smoke")

Despite Henry's initial attraction to Betty due to her beauty, he remained steadfast in his love for her and uncritical of her appearance, despite her later weight gain and dying her signature blonde locks black. As a politician, he seemed to not use his influence inappropriately. For example, when Betty got a ticked for unsafe driving and asked him to fix it, he explained that the way he fixes tickets is to pay them.

Sally Draper seemed fond of Henry, even hoping, for Henry's sake, that they divorce. When Betty learned that she was terminally ill of cancer, she told Don that the kids needed the presence of a woman in their life and that living with her brother William and his wife Judy was in their best interests.  Sally, however, felt it best that her brothers remain with Henry and asked Don to help persuade Betty of that. ("Person to Person")

Henry Francis sure loved his checkered and sweater vests and ties. His style does not change much throughout the seasons; he wears dashing vertical print ties and distinguished white shirts that are conservative, a reflection of his political position. Betty seemed to be attracted to Henry's polished maturity, and she tailored her wardrobe to match her new husband's understated style. Henry's fashion choices were a reflection of his social class and his political expertise. 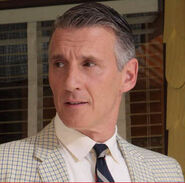