Jantzen Swimwear was a subsidiary line of the Portland Knitting Company. PKC created the rib-stitched suits in 1915 and later coined the term "swimming suit" (vs. "bathing suit").

Jantzen advertising in the mid 20th century was playful, vibrantly colorful, and a bit racy with it's images of men and women relaxing, playing, and chasing in what would, a few years earlier, have been considered a state of undress.

Jantzen Swimwear hired Sterling Cooper Draper Pryce to attempt a new sales strategy in November 1964. After a disastrous week, and a meeting that appeared to be going nowhere, Don Draper told the clients, "You're too scared of the skin your two-piece was designed to show off" and promptly kicked the executives out of his office. ("Public Relations") 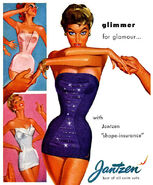 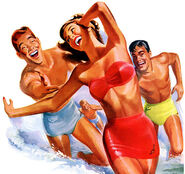 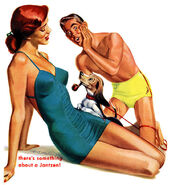 Add a photo to this gallery
Retrieved from "https://madmen.fandom.com/wiki/Jantzen_Swimwear?oldid=21479"
Community content is available under CC-BY-SA unless otherwise noted.