watch 03:27
Wiki Targeted (Entertainment)
Do you like this video?
Play Sound

Joyce Ramsay is an assistant photo editor at "Life" magazine.

One morning both Peggy Olson and Joyce ride the elevator together. Peggy noticed that Joyce had a pile of rejected photographs and inquired about them. The photos were taken by one of her friends, but since her boss hated nudes, they were not used. Later, Joyce invited Peggy to a party that her photographer friend is holding downtown.

At the party, she offered Peggy a joint and began to hit on her. "I have a boyfriend," Peggy said. "He doesn't own your vagina," Joyce replied. "No, but he's renting it," laughed Peggy. A police raid ended the party, and the two escaped out a fire escape. ("The Rejected")

Joyce stopped by Peggy's office to say hello. Upon entering the office, Stan Rizzo, playfully mocked her for being a lesbian. ("The Beautiful Girls")

Joyce and Peggy visit Jones Beach. While packing up the car and preparing to head home, a few other people joined them in the car, including Abe, who insisted he didn't plan their meeting. ("Chinese Wall")

Joyce brought along her model friend, Carolyn Jones, to the office. Carolyn mentioned that she was out of work and that she had just previously worked with Topaz Pantyhose. After a brief visit, she and Carolyn left the office. ("Tomorrowland")

Joyce walks into Sterling Cooper Draper Pryce with graphic photos of the recently committed murders of eight nurses in Chicago. There were nine possible victims, with the one survivor hiding under the bed until the murderer left. Ginsberg reacts in disgust to the other employees' fascination with the murder photos. ("Mystery Date") 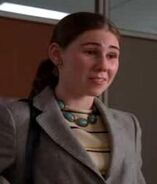 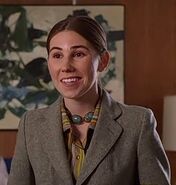 Joyce
Add a photo to this gallery
Retrieved from "https://madmen.fandom.com/wiki/Joyce_Ramsay?oldid=23968"
Community content is available under CC-BY-SA unless otherwise noted.