Kenneth "Ken" Cosgrove was an account executive at the Sterling Cooper Advertising Agency. Originally from Burlington, Vermont, Ken attended Columbia University. Starting out as a hobby during high school, Ken was also a writer of fiction. He was married to Cynthia Baxter, whom he met while trying to get published as she worked in the publishing industry.

Ken's short story "Tapping a Maple on a Cold Vermont Morning" was published in the prestigious journal Atlantic Monthly, much to the chagrin of jealous colleagues Paul Kinsey and Pete Campbell. Pete, in particular, felt extremely competitive with Cosgrove though Cosgrove didn't seem to notice, as Cosgrove took great enjoyment from his writing but was oblivious to the rivalry others felt towards him. ("5G") Another coworker who took an interest in Ken's writing was Salvatore Romano, who appears to have developed a crush on Ken and invited him to dinner. Ken, however, was oblivious to Sal's attentions.

Harry Crane discovered that Ken made significantly more than him, spurring Harry to carve out a role for himself as head of the newly created television department.

In 1963, Ken and Pete were pitted against each other for the same job of accounts director. Ken, projecting an aura of quiet confidence, competence, effortless meeting of client needs, showed himself to understand the clients better than Pete, and was promoted, upsetting Pete to such a degree that Pete considered quitting. When Don Draper, Bertram Cooper, Lane Pryce, and Roger Sterling left Sterling Cooper for Sterling Cooper Draper Pryce, Ken was not asked to join them, finding out about the departure upon his return to work the Monday after they left the firm. ("Shut the Door. Have a Seat")

Ken made an appearance at the annual CLIO award ceremony. One of his party accidentally dropped a hint that he might be working with SCDP soon. Pete, distraught with the idea that Ken would be working for SCDP again, got confirmation from Lane Pryce that they indeed intended on bringing Ken to the firm. Pete eventually accepted, but made sure that Ken understood that things had changed. Ken jokingly acknowledged this, pointing out that Pete's character had not changed one iota since Sterling Cooper. ("Waldorf Stories")

Ken was out with his fiancee and her parents, when he encountered John Flory, an account executive from BBDO. John gave his condolences and moved along. Ken, slightly confused, excused himself from his guests and chased after John, finding out only then that Lucky Strike had gone over to BBDO. Ken immediately apologized to his guests, and went to see Pete at the hospital, where Trudy was awaiting childbirth. He was later seen at a meeting of the entire firm, where the senior executives presented a united front that the company was fine, though all employees must stand firm and try to reach out to new customers. ("Chinese Wall")

Ken continued to surreptitiously write science fiction while employed at SCDP, under the alias Ben Hargrove, writing such stories as "The Punishment of X-4" for science-fiction magazines. The stories were sometimes thinly veiled allegories relating to events happening at SCDP. His secret is accidentally exposed at a dinner party at the Campbell household. Pete, still feeling a rivalry with Ken for his literary success, tells the senior partners about Ken's extracurricular activities, leading them to tell him in no uncertain terms that he would have to give up his writing as the time and energy spent on it might take time away from his duties at SCDP. Ken, having finally begun to understand Pete Campbell's malignant attitude towards him, started writing again under a new alias, Dave Algonquin. ("Signal 30")

Ken ends up being given the high prestige, high profile Chevy account, and moves to Detroit to manage the account. While there, the auto executives engage in high risk, high excitement behavior such as forcing Ken to drive very fast while they cover his eyes so he cannot see, resulting in an accident where Ken is badly injured. Later one of the auto executives shoots Ken in the face when they are out hunting, leading to Ken losing an eye. After this experience, Ken decides to stop working for the Chevy account.

Shortly after SCDP becomes a subsidiary of McCann Erickson, Ken's wife Cynthia urges Ken to quit his job as they now have the money to live without it, and devote himself to writing full time. Ken thinks about it and seems to be leaning towards leaving advertising entirely. However, this plan is derailed when he ends up being abruptly fired by Roger and Ferg following McCann Erickson's purchase of 51% of Sterling Cooper & Partners. The firing is due to Ferguson's anger at Ken for what he saw as a betrayal after Ken left McCann and badmouthed it. The dismissal leads Ken to decide to continue working: he takes over his father-in-law's position at Dow Chemicals, an important client of SC&P, where he will now be in the position to control the hiring and firing of the SCDP account, and give them what he promises will be a difficult time maintaining their account with Dow, out of spite. ("Severance")

He is seen having a dinner meeting with Pete Campbell and Don Draper, giving them a difficult time by placing their previous work for Dow Chemicals under harsh scrutiny. Eventually when McCann dissolved SC&P to absorb it into their own building, Pete and Sterling attempted to convince Ken to move Dow Chemicals to their new independent subsidiary branch at SC&P West in California. While Ken had no desire to work with McCann, he was also wary of compromising his new position at Dow Chemicals if he suggested to them the bold move of changing advertising agencies, preferring to remain compliant and refused to move Dow's account to SC&P West.("Time & Life") 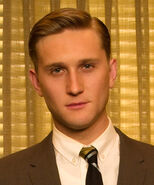