View source
watch 01:33
Wiki Targeted (Entertainment)
Do you like this video?
Play Sound

Marie Calvet (English IPA /kælveɪ/) is Megan Calvet's mother and Emile Calvet's wife. She seems rather unhappy with her husband, possibly jealous of the attention he gives their daughter, Megan. Unbeknownst to Emile, when Marie is in the United States visiting Megan, she also has an affair with Roger Sterling. Marie does seem to have some respect for her son-in-law Don, despite the fact that he is an American who does not speak French. With one conversation with Megan, Marie chides Megan to do her God-given duty in being a good wife to Don and stepmother to Don's children, trying to get Megan to forget about acting as "not every little girl can do what she wants; the world cannot support that many ballerinas".

She is married to Roger Sterling by the final episode.

Marie and her husband Emile 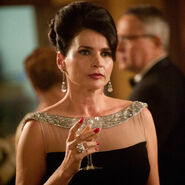