Megan Calvet was Don Draper's wife and worked at Sterling Cooper Draper Pryce. ("Tomorrowland") ("Christmas Comes But Once a Year") She used to be an aspiring actress. ("Lady Lazarus")

Born in Montreal, she worked as the front desk receptionist and later as Don Draper's secretary. She was strikingly pretty and attracted the attention of Peggy's artsy friends as well as Joyce Ramsay, the lesbian assistant photo editor at Life magazine, who worked several floors above SCDP, and came around to visit Peggy. ("The Rejected")

She participated in a focus group Dr. Faye conducted for Ponds Cold Cream, one of SCDP's clients, and during the focus group related the story of her evening skin care regime which consisted of splashing cool water on her face, just the way her mother did it. She admitted that she was of "French extraction." ("The Rejected")

Megan interrupted a meeting twice to tell Don that first his daughter was unexpectedly in the office and a second time to tell him that his secretary, Ida Blankenship had died. Don's help was requested, so he excused himself from a meeting to help deal with the situation. She later worked both the front desk and Don's desk in lieu of a replacement secretary filling his desk. When it came time for Sally to return home with her mother, Sally made a scene, one that neither Don nor Faye could ameliorate. Sally ran down the hall of SCDP and fell. Megan acted to comfort her. ("The Beautiful Girls")

Megan was embarrassed and alarmed when Don questioned her about a form for the Department of Defense that she filled out and had him sign. She was unaware that his frustration stemmed from worry that his true identity would be discovered if a thorough background check was conducted. ("Hands and Knees").

Late at night, while still in the office, Megan admitted that she was interested in the work that Don and Peggy were doing. Because of the crisis with Lucky Strike, Don was forced to work late, so she asked if she could stay and look over the work that he was doing. They began to talk, with Megan stating that she believed Don was doing the right thing by dumping Lucky Strike, but the conversation soon ended when she kissed him. She implied that she would not have the same problems that Allison had, and they then had a sexual encounter. ("Chinese Wall")

After Betty fired Carla, Don offered to double Megan's salary if she accompanied him to California to help him with his children during the trip. Arguing with Bobby at a restaurant, Sally knocked over a milkshake. Don flashed with anger, then watched admiringly as Megan handled the mishap calmly and competently, without scolding the children or creating an incident, in contrast to Betty's behavior when the children caused trouble. The two continued their sexual relationship while in California, with Don telling her "I feel like myself when I'm with you". On the trip, he asked Megan to marry him. She excitedly accepted, and Don slipped Anna Draper's ring on her finger, which he conveniently had with him because she had left it to him in her will and part of the reason for his California trip was to settle the late Anna's estate, at which time he took possession of the ring. It was the ring the true Don Draper used to propose to Anna.

Later, Don promoted Megan to copywriter, as she expressed a wish to become one. While many men of SCDP (and men in general at that time) would have had problems working with their wife, Don attempted to make their work/home relationship work, albeit with bumps in the road. When Megan threw a surprise party for Don, she serenaded him by singing the Gillian Hills song "Zou Bisou Bisou" in her native language of French, declaring privately that she hoped the party would make everyone want to go home and have sex. While all the guests loved her performance, the more conservative Don was upset as he felt her dancing and singing were too sexual. Indeed, the next day in the office, Harry Crane made some sexually explicit comments about Megan. This upset her and she left work early. Don then went home to see what was wrong, and when he returned home, he was met with the scene of Megan, in her underwear, cleaning up after the party. He angrily accused her of embarrassing him with her provocative dancing, but then the fight turned playful, ending in sex. Don agreed to handle their work/home relationship better ("Tomorrowland")

Megan was a free spirit. Her style reflected her creativity and youth. Megan was also a chameleon of sorts. Her style morphed from professional secretary in the sixties to the hippy culture of the late sixties and then the style of the West Coast. Compared to Don Draper's eternal iconic appearance as the man in the gray/grey suit, Megan changed with the times and with her career while Don continued to sport the same aesthetic through the years. 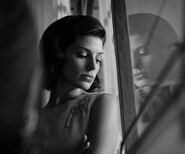 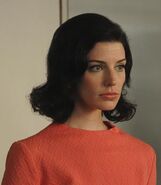