Before 1962, Mohawk Airlines was a client of SC, but the account was dropped to avoid any conflict of interest, in favour of trying to get American Airlines. (Flight 1) Duck Phillips had a contact with an executive at American Airlines, but the executive was fired before SC can show its ideas. This left Sterling Cooper Advertising Agency with none of the airlines. (Three Sundays)

A few years later, the airline is "in a lot of trouble" according to Pete Campbell, who, in the spring of 1966, manages to seduce them with his pitch. (A Little Kiss, Part 1)

Mohawk currently is one of the plum clients of Sterling Cooper Draper Pryce, but their tottering business still places both firms in a precarious position. The executives liaising with SCDP are Henry "Hank" Lammott, and Jack.

Mohawk was founded in 1945 and based in Ithaca, NY. In 1958, Mohawk Airlines hired a black woman as a stewardess. They introduced the advent of handling reservation services by computer databases in 1961 and used flight simulators for their flight schools. In 1971, the strikes had become so problematic that Mohawk looked to their longtime rival, the Pittsburgh-based Allegheny Airlines about a merger, which was completed in 1972. Allegheny changed its name to USAir in 1979 and later became known as US Airways. 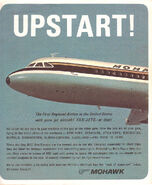 Mohawk Print Ad from 1965
Add a photo to this gallery

Retrieved from "https://madmen.fandom.com/wiki/Mohawk_Airlines?oldid=22335"
Community content is available under CC-BY-SA unless otherwise noted.