Margaret "Peggy" Olson is an employee at Sterling Cooper Advertising Agency who starts out as Don Draper's secretary.

She later gets promoted as copywriter, the first female to hold such position since World War 2. Peggy later accepts the position of Copy Chief at Cutler, Gleason, and Chaough.

Peggy was born May 25, 1939 to a Roman Catholic Norwegian and Irish-American family and grew up at Bay Ridge in Brooklyn, New York. When she was 12 years old, her father died of a heart attack in front of her. She has a sister named Anita. Shortly after graduating from the Miss Deaver's, a "topnotch" secretarial school in Brooklyn, Peggy started her career as secretary to Don Draper, the creative director at Sterling Cooper.

On her first day at Sterling Cooper, Peggy is given a tour of the company by office manager Joan Holloway. With her first day nearly complete, Don chastises her for letting Pete Campbell go through his garbage to find report but tells her that she has a fresh start tomorrow. That night, Pete shows up at Peggy's door, drunk. "I wanted to see you tonight," he says. Without a moment of hesitation, she lets him in. ("Smoke Gets in Your Eyes")

Peggy begins her job at Sterling Cooper fending off advances from not only Pete but Paul (who later nicknames Peggy "Mouse Ears"); Paul tries to move in on her after giving her a tour of the office and its various departments. ("Ladies Room")

When Pete returns from his honeymoon, he remains conflicted about his involvement with Peggy. Feeling guilty, Pete brings Peggy into a meeting with the creative team. Before joining Harry Crane, Paul Kinsey, and Salvatore Romano, he tries to explain that their relationship can not happen. Peggy appears disappointed, but understands. ("Marriage of Figaro")

Because she is aware of Don's frequent "lunch" meetings with Midge Daniels, Peggy mistakes a meeting between Don and Adam Whitman as another encounter with Midge since she is unaware that Adam is Don's brother. Betty Hofstadt arrives with the kids and Peggy attempts to stall them, believing that Don is currently with another woman. Peggy asks Joan to help; Joan covers for Don to Betty. Joan later tells Peggy that she is not happy that Peggy confided in her that Don may be sleeping with other women and that keeping Don's confidences is part of the job. ("5G")

After impressing Draper with feedback and copy for the Belle Jolie account, Peggy begins to get noticed. ("Babylon") She is promoted to copywriter for the Rejuvenator account.

Pete and Peggy once again become involved, this time as they both end up being the first people to arrive at work. "Do you know how hard it is to see you walking around here everyday?" Pete says, kissing her. Once they have finished, Peggy sees that her collar is ripped. Pete then offers to take a look at her Belle Jolie copy.

Peggy soon begins to gain weight. She splits one of her dresses one day, forcing her to borrow one of Joan's more form fitting dresses. ("Shoot") She is brought into a meeting to test a "weight loss" tool, which is a pink plastic belt shaped like women's panties with a small control box and electric cord. She tests it one day, and discovers that it does little for weight loss, but causes a great deal of stimulation.

Pete is not impressed with Peggy's work, and complains to Don; Don retaliates by telling Peggy that she has been promoted to junior copywriter and that Clearasil is her first project. Soon after the promotion, Peggy (who had no idea that she was pregnant) gives birth to Pete Campbell's child. ("The Wheel")

After giving birth to her child, Peggy is kept in the hospital; her state of mind is not what it should be and she remains bedridden and almost comatose. Don visits her in the hospital and gives her advice; this advice bolsters Peggy and ultimately enables her to leave the hospital and resume life. She returns to work with renewed determination. Co-workers speculate that Peggy spent her leave of absence at a fat camp.

When rumors of the purchase of parent company of Sterling Cooper reach Don Draper, he pushes the senior partners to attempt a purchase of the company. When that fails, they secretly round up a list of clients loyal to them and steal important documentation that will smooth the transition. Peggy Olson, Pete Campbell, Joan Holloway, and Harry Crane are selected as the first employees.

Peggy is working hard as a copy writer a year after the start of SCDP.

One morning Peggy meets Joyce Ramsay on an elevator ride. Peggy sees that Joyce has a pile of rejected photographs and inquires about them. Joyce invites Peggy to a party that her photographer friend is holding downtown. At the party, she offers Peggy a joint and begins to hit on her. "I have a boyfriend," Peggy says. She is then introduced to the photographer Davey Kellogg, who is less than impressed with Peggy's suggestion that he sell his talent so that he can have money to pursue his art. When the cops raid the event, Davey's friend, the journalist Abe Drexler, helps Peggy hide in a closet where they share a kiss. ("The Rejected")

Months later, Joyce and Peggy go to grab drinks at a bar in midtown Manhattan. Abe had not wanted to visit her at work and thought looking up her home address was odd, so he had Joyce help arrange a second meeting. At the bar Abe criticizes corporations and Peggy's work, not understanding that patronizing and belittling a young career woman does not work as flirting. Peggy later pretends she would not have been interested in working on the Barry Goldwater campaign. After being through being insulted, she leaves. The following day, Abe comes to SCDP to apologize. He reveals he wrote her a story called "Nuremberg on Madison Avenue." After reading it, Peggy asks that he not publish it since the information in the article could cost her career. He tells her that her job is a waste and that she could be so much more, to which Peggy counters, telling him that she is not a political person. Defeated, Abe promises her that he will not bother her again. ("The Beautiful Girls")

Joyce and Peggy visit Jones Beach. While packing up the car and preparing to head home, a few other people join them in the car, including Abe, who insists he didn't plan their meeting. Arriving back in the city, they head to her place. Abe and Peggy begin to kiss, and spend the night together. In the morning, Abe begins to dress and prepares to leave; Peggy awkwardly tells Abe he should do whatever he usually does after a one night stand. Abe tells Peggy that he doesn't "usually do anything," after which Peggy tells him she doesn't want him to leave. Later, he brings a package to her office, pretending to be a delivery boy. She comes into work late, and only then discovers the problems with losing the Lucky Strike account. ("Chinese Wall")

Around 1965, Abe makes cryptic dinner plans with Peggy in the middle of the week. Certain Abe is planning to break up with her, she consults Joan on what to do and is surprised when Joan suggests that Abe is going to ask Peggy to marry him. Excited, she buys a new dress for the dinner, readying a yes, only to find out that Abe merely wants to move in together instead. Trying to hide her disappointment, Peggy says yes and faces the criticisms of her mother, only to be assured by Joan that she is being a brave girl and that this is a good thing for her.

After getting a lead from one of Joyce's model friends, Peggy and Stan chase after Topaz Pantyhose. The two meet with Topaz and are able to close the account, earning Peggy Don's approval for getting the agency its first client after the loss of Lucky Strike.

With Don marrying, Peggy's workload at SCDP increases as she basically is now Don's right hand; almost always, he is away spending time with Megan. Peggy also mentors Megan on her new copywriter position, which adds to Peggy's frustration as Don always whisks Megan away earlier than everyone. Don's treatment of her, and SCDP in general, further deteriorates after Peggy hires Michael Ginsberg, who is equally brilliant and sometimes outshines her, leaving her accomplishments unnoticed.

After meeting up with Ted Chaough, who offers her a huge pay raise and a copy chief position, Peggy unconditionally quits SCDP to move to CGC. Don takes her resignation calmly and kisses her hand. It isn't long, however, before she becomes dictatorial, as she finds working with CGC copywriters far more frustrating than working with Stan or Ginsberg back at SCDP.

One late night at work, she receives a call from Stan who gossips to her that Heinz Ketchup is looking to be represented by a new agency, particularly by SCDP, after Heinz Baked Beans, Vinegar, and Sauces division got huge sales boost after the advertising work from SCDP. Ted eventually picks this information and orders Peggy to start working on a pitch for Heinz.

On the day of the presentation for Heinz Ketchup, Peggy, Ted, and CGC greet the SCDP team of Don, Pete, and Stan after they finish their presentation with Heinz Ketchup, which didn't quite capture the client's thoughts. Don bids them luck but stays to eavesdrop on Peggy's pitch and finds out that Peggy is using his previous pitch of "changing the conversation." Don realizes that CGC is getting the account and spends the afternoon drinking with the rest of the SCDP team only to be further taunted by Ted who says they got the account, irking Stan, who gives Peggy a dirty finger.

When CGC and SCDP merged, they became Sterling Cooper & Partners. She had a small affair with Ted prior to his move to California. When the partners put Don on leave, her new boss became Lou Avery who was overly dismissive of her work.

When Sterling Cooper & Partners was consolidated with McCann Erickson, Peggy found herself once sagain climbing the corporate food chain. Towards the end of the season, Joan Holloway approaches her with an offer to be a partner in a producing firm. She almost accepts, but at the last minute, due to Stan's suggestion, rethinks what she really wants and decides to stay at McCann. In her final scenes of the show, she and Stan confess their love to each other, and are seen still working at the firm and carrying on a loving relationship. ("Person to Person")

When first introduced to Mad Men, Peggy Olson's mousey wardrobe choices were innocent and conservative. The antithesis of curvy office vixen Joan, Peggy seemed to be trying to blend into the walls. Peggy has grown considerably this season; she is finally forging a place for herself among the powerful men at Sterling Cooper Draper Pryce. In latter seasons, Peggy's style reflects her growing inner confidence-- her new haircut is short and stylish, and she has taken to wearing pops of blue, white, and yellow. Peggy's new, more modern style represents the strong, independent, adventurous woman she has become, and we can't get enough of it! Peggy's style may reflect the greatest transition throughout the 1960s. This may represent the changing status of women during the decade.

"Smoke Gets in Your Eyes"

Proof she can be One of the Men, in Maidenform 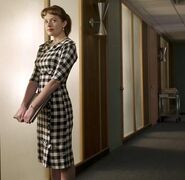 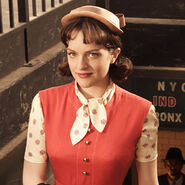 A turn in the Don, Peggy relationship

Pleading, on his knees 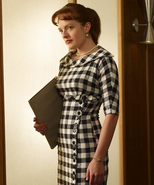 Enlarge to see Peggy (with Joyce at loft party)

Peggy in Diner on her birthday

Peggy with the new SCP colors in tile
Community content is available under CC-BY-SA unless otherwise noted.
Advertisement