"Person to Person" is the 14th episode of the 7th season, and the 92nd episode overall.

The characters find their destinations in life.

In the fall of 1970, Don calls Sally from Utah, where he's witnessed Gary Gabelich's Blue Flame break the land speed record at the Bonneville Speedway. Sally gives Don the news about Betty's cancer diagnosis and states her desire to have the family stay with Henry. Phoning Betty next, Don implores to have his children live with him. However, Betty insists upon leaving them with her brother and his wife, stating they need stability and "a woman in their lives," things that Don cannot provide. Making his way further west to California, Don reunites with Anna Draper's niece Stephanie, who has left her child with his paternal grandparents. She is en route to an Esalen-like, oceanside spiritual retreat further up the state's coastline, and decides to take Don with her.

Meanwhile, Joan and Richard discuss relocating and starting a new life together when she receives a business proposition from her old colleague Kenny. She then offers Peggy a partnership in a film production company she is starting. Richard is displeased with Joan's professional ambition, because he knows that it would be the primary focus of her attention and time, and he is looking for her to start a new life with him and leaves. Roger tells Joan he is marrying Marie, however, since he has redone his will after his daughter has left, and he wants to give a large part of his estate to his and Joan's son, Kevin.

Back at the Francis residence, Sally has returned home from boarding school. Explaining that she missed her family, she cancels her summer plans to travel to Madrid in order to spend more time in the household. Bobby asks his sister if it "is time", indicating that despite Betty's intent, he has noticed his mother is ill, and dying.  Noticing that Bobby has burned hisgrilled cheese, Sally offers to show him how to do it properly.

Later at the retreat, Stephanie abandons Don after receiving troubling feedback about leaving her child with his paternal grandparents. Stuck in the coastal region with no means of leaving for several days, a distraught Don calls Peggy in her office. Peggy pleads for him to return home and to his job, insisting McCann Erickson would gladly take him back and there is work to be done with the Coca-Cola account. Don then confesses many of his wrongdoings to Peggy: stealing another man's name, breaking his marriage vows and scandalizing Sally, and confides that the main reason he called was he never bid her goodbye.

After Don hangs up, Peggy discusses her disturbing call with Stan. Though Peggy is concerned for her mentor, Stan reasons that Don has disappeared off the radar many times before, often returning revitalized with bigger and better ideas. When the discussion turns into another argument, Stan reveals his true feelings for Peggy. Peggy initially seems flustered, but realizes she loves him too. He then rushes to her office where they kiss. Peggy also ultimately turns down Joan's partnership offer.

A counselor at the camp notices that Don is upset and persuades him to attend the retreat's confessional seminar later that evening. During the meeting Don sees a fellow attendee (Evan Arnold) confess to feeling unloved and overlooked, at home and at work. At one point the man, named Leonard, speaks of a dream where he is an item in a refrigerator no one selects and this leads him to break down. Don, in commiseration, embraces Leonard and breaks down as well.

The episode (and the series as a whole) ends with a montage of the fates of the major characters: Pete, Trudy, and Tammy board a Learjet that will take them to their new lives in Wichita. Joan operates her new business, Holloway Harris, from her dining room while her mother looks after her son. Roger and Marie sit in a cafe in Paris during their honeymoon and muse about an elderly couple seated nearby. Sally does housework and tends to her younger brothers, while Betty smokes a cigarette and reads behind her. Peggy, hard at work on an assignment, receives a loving embrace from Stan. Finally, Don, seated in the lotus position, meditates and chants at the ocean-side retreat when a half-smile comes to his face. The show then smash cuts to the groundbreaking 1971 "Hilltop" television advertisement for Coca-Cola, created by McCann Erickson. 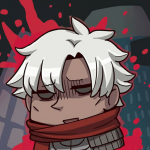