"It might be a lightning rod for the government and other people out to kill advertising." -- Pete Campbell, Indian Summer

The Relax-a-Cizor is a product that the Sterling Cooper Advertising Agency is a client for.

The assignment was to come up with a name and advertise it. The client claimed that it was a weight loss invention. Its physical description was that of a pink plastic belt shaped like women's panties with a small control box and electric cord. The team, unsure how to test the product, gave it to Peggy Olson, dubbing it the "Electrosizer".

Later that night, Peggy sat in her bedroom, papers spread on her bed. She decided to give the contraption a try. Peggy turned the dial, and immediately became aroused by the vibrations. She peels it off in a hurry. The next day, Peggy struggled to explain that she felt something that most women would like to feel. "It vibrates, and that coincides with how you wear it", she says. "It's probably unrelated to weight loss". Don realizes this new benefit and asks Peggy to figure out how to put it into words. ("Indian Summer")

Later, Ken Cosgrove and Peggy watched as three women auditioned their vocal talents for the "Relax-a-Cizor" on the other side of the glass. Peggy opted to go with Annie, despite Ken's partiality to Rita. As Annie stood in front of a music stand and reads the copy into the microphone, Peggy wasn't satisfied. She interrupted several times to get Annie to speak with more confidence and beauty. But when Annie doesn't understand Peggy's suggestions, she gets choked up. As Annie cries, Peggy tells Ken to console her and then have Rita come in for the job. ("The Wheel") 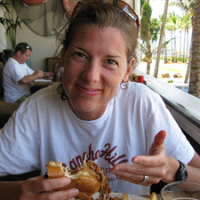