Sally Beth Draper is the eldest child of Don Draper and Betty Hofstadt, when Betty was 22 and Don was 28. She was conceived in the woods during a vacation with Betty's parents to Lake Champlain. ("The Better Half") She was born in April, 1954. It isn't until Season 3, Sally Draper became more of a central character. As of Season 4 she was been promoted to a starring role.

As a young girl, she is seen to have a particularly close relationship with her younger brother Bobby. We see straight away that Sally is an adventurous girl, from making her father cocktails to smoking one of her mothers cigarettes, and even being taught how to drive by her grandfather Eugene Hofstadt. From an early age she has given the impression to have garnered a particularily bad taste for her mother and has always seemed more in favour of her father. She also once claimed that her mother does not have rules for her. She also seems quite modern for her age, when she kisses Ernie Hanson, Francine Hanson's son.

In season three Sally grows particularly close with Betty's father Gene. Gene moved into the Draper household after suffering a second stroke. They engage in activities such as reading to each other and sneaking ice cream before dinner while Betty isn't around. Gene encourages Sally that she can do anything if she really sets her mind to it, no matter what Betty says. It wasn't until Gene's death Sally's behaviour began to change. After her devastating loss, she scolded her parents and relatives that he is really gone and they shouldn't be laughing about it, although they were merely reminiscing over the good times they had with Gene. In order to commemorate Gene's memory, Betty decides to name her and Don's new baby boy Gene and also sets up the nursery in Grandfather Gene's old room, which terrifies Sally to the point where she believes that Baby Gene is the ghost of her dead grandfather until Don reassures Sally that Baby Gene is just her new baby brother.

In 1964 and well into 1965, Sally struggles to deal with her parents' divorce. Betty's new husband Henry Francis and Don's endless string of girls are hard for her to accept; Sally acts out in frustration, refusing to eat at the dinner table, calling her dad in the middle of the night, and cutting her own hair. ("Public Relations") ("The Chrysanthemum and the Sword")

In late 1964, while her step-father, mother, and brothers are shopping for a Christmas tree, Sally runs into Glen Bishop, who is working at the Christmas tree stand. He shows her a pocket knife attached to a woven lanyard that he made, and tells Sally that he will call her later. After Sally tells him that she hates it at home, he breaks into the Draper residence and trashes the house, leaving Sally's room untouched. Sally finds his lanyard on her pillow and smiles. ("Christmas Comes But Once a Year")

Sally is caught "behaving inappropriately" at a friend's house after everyone else has fallen asleep (a girl at school had told her about men and women, and Sally wanted to explore herself). She is immediately taken home in disgrace by her friend's appalled mother. Horrified, Betty sends Sally to a psychiatrist. ("The Chrysanthemum and the Sword")

Months later, Sally is brought to SCDP by a woman named Vivian Winters, who found her hiding on a train trying to avoid the conductor. Sally had run away from home because she wanted to live with her father.

Don calls Betty, who says she will pick Sally up the following day. She is left in Don's office while he finishes work for the day. While she is quietly sitting at Don's desk, she is again told to stay in his office when Ida Blankenship is found dead at her secretary's desk.

Afterward, she is taken to Don's place by Faye Miller, who takes care of her until Don comes home. While she thinks Faye is nice, she wonders if her father is seeing her. She is inquisitive and even points out that Faye knew that he had peanut butter. Don obliges her request and orders pizza. The following morning she makes French toast for Don; she confuses a bottle of rum for a bottle of Mrs Butterworth's, though Don is impressed with the taste. He decides to take her to a museum for the morning. When it comes time for her to return home with her mother, she makes a scene, one that neither Don nor Faye can calm. She runs down the hall of SCDP and falls; Megan Calvet is there to comfort her. She quietly leaves the office with her mother. ("The Beautiful Girls")

Don acquires Beatles tickets from Harry Crane. Sally receives a phone call from Don, letting her know that they would be going to the concert, much to her delight. ("Hands and Knees")

After months of seeing the psychiatrist, Sally appears to be improving. She asks why they never ate with Henry for dinner, and politely asks if she could eat dinner with him. Sally tells the psychiatrist that she hides her anger. The psychiatrist is proud of Sally and all the progress that she has made.

In her free time she talks to Glen Bishop, and on occasion he offers her cigarettes and Coca Cola. One day Betty sees both of them walking together into the wooded area they hung out in, and confronts her. Later, Betty tells Henry that it is time to move. Upon hearing this, Sally runs upstairs and cries in her bed, holding Glen's lanyard. ("Blowing Smoke")

In the Season 5 premiere "A Little Kiss, Part 1", Sally has accepted Megan as her stepmother, and enjoys spending time with Megan and Don during her weekend visits.  She is, however, at odds with her step-grandmother Pauline Francis, who she feels treats her like a child. When Sally hears about the Richard Speck murders she tries to get Pauline to tell her what happened to the nurses, but Pauline refuses. Sally finds the newspaper article Pauline was reading earlier, and becomes too frightened to sleep after reading it. Sally confesses to Pauline that she read the article and Pauline gives her half a Seconal pill. In the morning when Betty and Henry arrive home, Sally is asleep under the couch (referencing the Richard Speck murders where one of the women survived by hiding under the bed). ("Mystery Date")

In the episode At the Codfish Ball, Don allows Sally to accompany him and Megan to an American Cancer Society banquet where he is receiving an award. We are also introduced to Megan's parents Marie Calvet and Emile Calvet. Here Sally observes what it is like to live in Don's world, where she acts as Roger Sterling's "date", handing him business cards and encouraging him to talk to prospective clients. Later in the evening Sally excuses herself to go the bathroom and accidentally walks in on Marie performing oral sex on Roger. Later, on the phone with Glen, Sally describes the city as "dirty". ("At the Codfish Ball")

In "Dark Shadows", Sally is working on a family tree for school and a jealous Betty tells her about Don's "first wife" Anna Draper. Confused, Sally becomes angry at Megan, accusing her of lying to her. Megan in turn tells Don about Sally's knowledge of Anna, which then makes Don angry with Betty. Realizing that Betty told Sally in order to stir up conflict, Megan tells Don just to forget it, because it's just going to give Betty the satisfaction she wants. Sally overhears this and pretends that the revelation meant nothing to get back at Betty. ("Dark Shadows")

Towards the end of the season Sally spends the weekend with Don and Megan after refusing to go skiing with her family. When neither Megan nor Don can take Sally to school on Monday, they allow her to stay in the apartment. Sally makes arrangements to meet with Glen. They go to the American Museum of Natural History, where Sally ends up getting her first period. Panicked, she flees to home and receives comfort from Betty, who gives her a hot water bottle to soothe her stomach and reassures her that it means "everything is working." ("Commissions and Fees")

As Sally progresses into young adulthood, she witnesses several disturbing events, such as in season 5 when she sees Marie Calvet, her stepmother Megan's mother, fellating Roger Sterling during a business dinner, and, most disturbingly, her own father having sex with his neighbor in season 6. Don's outright denial of the nature of the encounter alienates him from Sally, and, resentful of her parents, Sally decides to attend boarding school. While at school, Sally becomes a troublemaker, smoking constantly, sneaking alcohol onto campus, and dueling with golf clubs with her friends. By the end of the sixth season, Don decides to be more honest with his children, starting with showing them the now dilapidated whorehouse where he grew up. The choice to be truthful makes an impact on Sally and she begins to forgive her father for his transgressions by the beginning of the seventh season. However, she still objects to Don's decisions in life, telling her father that she does not want to be anything like her parents. "You're a very beautiful girl," Don responds. "It's up to you to be more than that."

As the series draws to a close, Sally faces further complications of growing up. Glen decides to join the Army and fight in Vietnam, causing a frustrated Sally to yell at him and express disdain over the possibility of his killing of innocent children and bystanders. Sally later expresses regret over her outburst and, through tears, tells Glen's mother that she is sorry and wants to say goodbye to Glen before he leaves for boot camp.

Sally learns from Henry that her mother Betty is dying from lung cancer. Sally makes a surprise visit to the Francis household, where Betty gives Sally a letter that she tells Sally to read after her death. Shortly afterward, back at her dorm room, Sally goes against orders and reads the letter anyway. In the letter, Betty includes instructions and a picture of herself to direct the funeral home how to prepare her. She tells Sally that she loves her, resulting in Sally breaking down in tears. The letter also says that Betty used to worry about Sally not "fitting in" with everybody else, but realizes now that conventional American society is about to have a crash course with reality that someone like Sally better realizes than most. Later, upon learning Betty wants to send Bobby and Gene to their uncle, Sally decides to cancel her planned trip to Madrid and serve as a maternal figure to her brothers. It is also implied that she will press for Henry to raise the boys after Betty's death, since she tells Don they should not be uprooted. The final image of Sally is of her washing dishes while Betty smokes at the kitchen table. 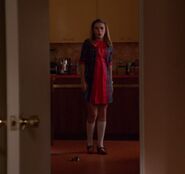 Sally on the phone with Glen.

Sally under the couch, Mystery Date

Sally and Gene
Community content is available under CC-BY-SA unless otherwise noted.
Advertisement