Sylvia Rosen is Arnold's wife, Mitchell's doting mother, and Don Draper's mistress for much of the sixth season.

She is Italian, a plumber's daughter, and a housewife who (unlike Megan) affects visible displays of her Catholicism (wearing a Catholic crucifix and displaying Catholic icons in her bedroom), while her husband is implied to be Jewish. Sylvia is strong-willed, unhappy, and intelligent, and like Don expresses interest in ending their liaison eventually. She is also friendly with Megan; this relationship significantly contributes to her ending her affair with Don, after she dreams that he died in a plane crash and she had to comfort Megan at the funeral. Don is heartbroken after Sylvia breaks it off, but she reminds him that he was happy with Megan once and can be so again. Nevertheless, Don becomes obsessed with Sylvia and of thinking of ways to get her back. In "The Crash" (Season 6, episode 8), while all of SCDP has been injected with a stimulant so they can work through the night to come up with work for Chevy, Don works feverishly too, but it turns out he's focused only on thinking of an inspiration to get Sylvia back, not with inspiration for Chevy. Elements of Sylvia's physical appearance (brunette hair and a facial mole) and her wearing a headwrap and kimono remind Don of his stepmother Abigail and of the maternal prostitute, Aimée Swenson, who forcibly initiated his first sexual act when he was a young teen.

When Don arranges with Ted to get Mitchell into the National Guard to avoid going to Vietnam, Sylvia is overcome by the favor and falls back into bed with Don, but Don's adolescent daughter Sally walks in on them. Sylvia reacts vehemently with guilt as Don runs after Sally. She is last seen with her husband in season 7, having reconciled, and ended her relationship with Don. 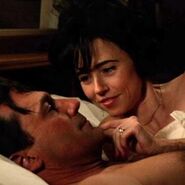