Trudy and Pete got married in March 1960, and spent their honeymoon at Niagara Falls. It's implied that the two didn't know each other that well before the wedding. ("New Amsterdam") She is completely unaware of Pete's previous dalliance with secretary Peggy Olson, or their subsequent affair.

They purchase an apartment on Park Avenue with the help of parents, much to the chagrin of Pete as he wants to make it on their own.

When Pete decides he wants to publish a short story, he convinces Trudy to meet with her ex-fiance Charlie Fiddich. Trudy and Charlie do converse briefly in his office, but the meeting turns sour when Charlie says that he misses her and knows that she rushed into her marriage.

Trudy and Pete visit a fertility doctor after having difficulty conceiving a child. She wants to look into alternative options for having children, including adoption, but Pete is opposed to raising a child that is not their own causing tension in their relationship.

Trudy and Pete's relationship has shown to improve since the end of season two. However, Pete later sleeps with a nanny that worked in their building while Trudy is visiting her parents. Ashamed of this, he tells her that he never wants her to go on a trip without him.

Later in the season, she is supportive of Pete's decisions when he questions whether or not he should remain at Sterling Cooper Advertising Agency. Trudy is still shown to want children.

Trudy discovers she's pregnant in late 1964. ("The Good News") On May 25, 1965 she runs into Peggy in the SCDP bathroom, and briefly talks about her pregnancy. Peggy made a joke about how she has a lot of practice with Pete, implying that he's a child, to which Trudy laughs. ("The Suitcase")

Trudy was in labor for quite some time before giving birth to a daughter, named Tammy Campbell. ("Chinese Wall")

Pete told Trudy that the money that was to go towards a loan for a house would need to go instead to the agency, which needed 50,000 dollars from him. Trudy forbid him from using their money in the firm, telling him it was the wrong decision to double down if the firm was going to go under. ("Blowing Smoke")

Pete and Trudy are now living in a house in the suburbs, much to Pete's annoyance over leaving the city. Despite this, Trudy is shown to be extremely happy with her new family life. During "The Phantom", Trudy tells Pete that he can get an apartment in the city instead of commuting home every day.

When Pete sleeps with a married neighbor in "The Collaborators", Trudy kicks him out of the house for being indiscreet. Instead of getting a divorce since she doesn't want to be a "failure", Trudy tells Pete that he can stay in his apartment and only come home when she allows it. In "The Flood", Pete calls Trudy to make sure Tammy and her are okay after the news of Martin Luther King Jr.'s assasination. She assures Pete that they are fine, and that she doesn't want him to visit during the weekend as they had planned. By the episode "For Immediate Release", Trudy to shown to be considering letting Pete come back home since he's been making more of a effort with her and their daughter. But when her father pulls his business with the agency after they see each other at a whorehouse, he tries to tell Trudy what happened. Trudy doesn't believe him, and tells him to get the rest of his things and leave.

While having dinner with his new girlfriend Bonnie in California, Pete runs into George Payton, who tells that Trudy's father recently had a heart attack. In The Strategy, Trudy comes home one night to find Pete waiting for her in the house after he spent the day with Tammy. He is clearly upset that Trudy wasn't there when he was supposed to drop Tammy off, and that she didn't tell him about her father. Trudy then tells Pete that he has no right to know what's going on in her life since he's not apart of her family anymore, and he leaves.

"Christmas Comes But Once a Year", Joan's conga line dress 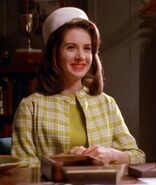